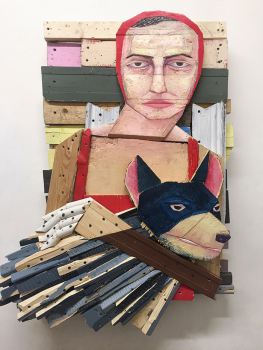 Assemblage and Process: Deconstructing the Works of Nicolas Holiber

Paint is for painting, except when it’s not. Nicolas Holiber’s portrayal of constructed images in relief utilize repurposed wooden pallets and recycled wood, creating dynamic figures and forms that demand to be seen outside of the formal limitations of the picture plane. In their jutting and angular formations they take part in real space with a visceral definition that defies the accepted parameters of both painting and sculpture.

All images courtesy of Nicolas Holiber and Gitler&____